All freedom comes from God. The truest most perfect freedom existed only in the Garden of Eden. Ever since, the pride of mankind has caused power and authority to concentrate with time, resulting in the progressive loss of freedom. The nearly inescapable end result is tyranny. The loss of freedom has been experienced in all cultures and political systems throughout recorded history. When freedom exists to any extent, it will be lost unless it is fervently and aggressively protected, by the people (YOU). Consider the flow:

“…where the Spirit of the Lord is, there is liberty” 2 Corinthians 3:17 KJV

“Stand fast therefore in the liberty wherewith Christ hath made us free, and be not entangled again with the yoke of bondage.” Galatians 5:1 KJV

All civilizations begin in a condition of chaos and anarchy with no external control by government or any other authority. Consider what might happen if you went down in a commercial airliner crash and became part of 100 survivors stranded on a remote uncharted island with no means of communication and little chance of rescue.

You and the other survivors initially work together for survival determining how to meet the immediate needs for food and shelter. Soon, however, disagreements break out, tending to escalate with time. At some point, a council of volunteers or elected members forms to draft guidelines for assuring more harmonious living among the survivors.

The guidelines prohibit certain actions and mandate others. But the voluntary guidelines are only partially effective and conflict continues. A mechanism is designed and designated people are given the authority to monitor compliance with the guidelines, seek violators, and punish them in a predetermined fashion. The guidelines have now become the beginnings of enforceable law.

Whoa! What just happened? All freedom…that’s right, all freedom comes from God as the incredible gift of free will, bounded only by certain moral limitations that He applies for harmonious living and to protect you and others from physical, emotional, and spiritual harm. Those limitations are an expression of His infinite and enduring love. Any form of government can only can only limit or deny any particular freedoms. Governments can only wield money and power in an impersonal way; they have no moral authority or ability.

Government continues to be “of the people, by the people, and for the people” as long as the laws passed and regulations adopted conform to or are aligned with Scriptural mandates as indicated by the region in the Figure labeled “Representative Government.” Such laws and regulations protect freedom. 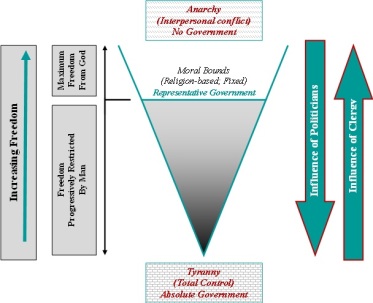 God-given freedom powered by His love and limited by Scriptural boundaries—primarily the prohibitions of the Ten Commandments and moral/ethical limitations on behavior—depend on voluntary restraint. The prohibitions and limitations were given for the benefit of mankind to assure the richness of the human experience.

“Though, when a people shall have become incapable of governing themselves and fit for a master, it is of little consequence from what quarter he comes.” George Washington

When laws are passed and regulations adopted extend beyond the region designed to protect freedom, then freedom is progressively lost. There is no reliable barrier along the road to tyranny. What do you think?

12 thoughts on “All Freedom Comes From God; Governments Take It Away!”