Have you ever heard someone say, “I never talk about politics or religion?” Good heavens, why not? Those two define who you are, what you think, choices you make and how you act. If those discussions are off limits, what is left to talk about—the weather, sports scores, latest fashions, and what’s for dinner? How boring is that? 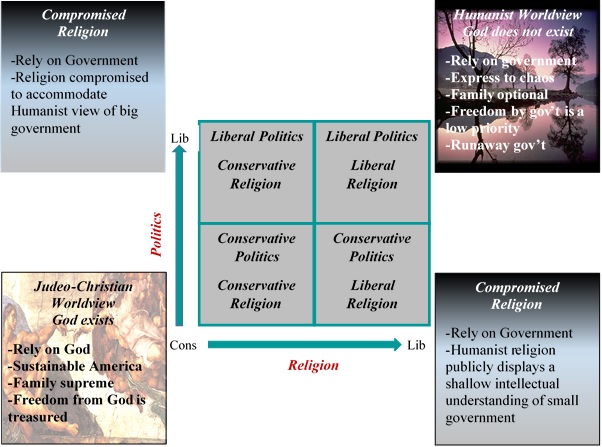 The self-imposed boundary is particularly egregious for Judeo-Christian believers. “I never talk about politics or religion” is something a Judeo-Christian believer must never say. It is a betrayal of God, faith, and other believers. Capitulation to political correctness—which always sugar coats the poison pill of sin—substantially interferes with the believer’s relationship and obligations to God. Political correctness is simply the Humanist’s tool designed to shut down the Judeo-Christian worldview. Consider God’s commands in Deuteronomy:

Fix these words of mine in your hearts and minds…Teach them to your children, talking about them when you sit at home and when you walk along the road, when you lie down and when you get up. Write them on the door frames of our houses and on your gates, so that your days and the days of your children may be many… [Deuteronomy 11:18-21 NIV]

We are commanded by God to talk about scripture virtually all the time, teach it to our children, and advertise it outside our home. It is not possible for a believer to be completely saturated with God’s words and His love, without that love spilling out in every area of life. Just to make sure, God warns anyone suppressing His love, because of political correctness. “Be careful, or you will be enticed to turn away and worship other gods and bow down to them. Then the Lord’s anger will burn against you…and you will soon perish from the good land the Lord is giving you.” [Deuteronomy 11: 16-17 NIV]

To have an impact on our surrounding culture, we must be able to freely, enthusiastically, and lovingly discuss politics and religion. When political correctness silences the Judeo-Christian worldview, the Humanist worldview aggressively fills the vacuum with little opposition or hindrance.

Politics is an expression of religion which is an outgrowth of our worldview. All political issues have spiritual roots. Our religious and political views emerge from one of just two worldviews that are an earthly manifestation of the eternal battle between good and evil, God and Satan.

Consider the graphic. It qualitatively displays the conservative to liberal religious spectrum horizontally and the conservative to liberal political spectrum vertically. Conservative religion and conservative politics at the lower left visually exhibit the Judeo-Christian worldview. Why? Because the believer relies on God (not government). Government is sharply restrained by the U.S. Constitution. It is the only worldview that assures a sustainable American culture, where the family reigns supreme, God-given freedom is treasured, and the passions of men are voluntarily restrained by their faith in God.

In contrast, Humanist religion and liberal politics at the upper right visually display the ultimate Humanist worldview that God does not exist. Man has declared himself to be his own god. The Humanist relies on government (not God). Growth of government is largely unrestrained, because of the belief that the “best and brightest,” whoever they are, should be vested with whatever authority and resources are necessary for them to make decisions for the rest of us.

The elite decision-makers are convinced that the rest of us are not capable of making basic life decisions. The Humanist road is a pathway to cancerous government growth, eventual self-destruction, and chaos. The family is optional and has a structure that defies definition. Freedom arises from the grace of government and is strategically dribbled out as a means of controlling the people.

Occasionally, a Humanist with a liberal mindset, perhaps cultivated in a liberal church or by childhood memories of religious training will remind the rest of us that scripture tells us to feed the poor, clothe the naked, care for the sick, and visit those in prison. However, those admonitions were directed at individuals and small groups that later became known as churches. When the government coopts those important tasks, its actions are both inefficient and deficient.

When the government does anything, it is financially inefficient (read wasteful) and an inefficient use of the labor of the employees. More importantly, government actions are emotionally and spiritually deficient. For example, the concept of mercy is elegantly explained by Portia during her famous courtroom speech in Shakespeare’s The Merchant of Venice:

The quality of mercy is not strain’d;

It droppeth as the gentle rain from heaven

Upon the place beneath: it is twice bless’d;

It blesseth him that gives, and him that takes:

‘Tis mightiest in the mightiest: it becomes’

The thronéd monarch better than his crown;

His scepter shows the force of temporal power,

The attribute to awe and majesty,

Wherein doth sit the dread and fear of kings;

But mercy is above this sceptered sway;

It is enthronéd in the hearts of kings,

It is an attribute to God himself;

Portia proclaims that the “quality of mercy…is twice bless’d; It blesseth him that gives and him that takes” and is “above this sceptered sway” (above government). Finally, “It is an attribute to God himself.”

When God directly instructs us in scripture to feed the poor, clothe the naked, care for the sick, and visit those in prison each effort is intended to bless the beneficent as well as those who benefit. When the government undertakes the same activities, the people and churches are robbed of the blessings and character building opportunities that result from giving. (Personal note: I’ve never been blessed by paying taxes.).

Most schools, including Ivy League universities, were started by churches to enable people to read the Bible for themselves and build strong character. The early Ivy League universities were established to prepare young men for the ministry. Most hospitals were created by the churches. Later, the schools and health care were commandeered by the government, with honorable intentions and still later commanded by the government with less than honorable intentions.

When people claim to hold conservative religious views and liberal political views or vice versa, their faith has been compromised to accept and support some degree of Humanism. The claim to be a “moderate” is even worse.

I know your deeds, that you are neither cold nor hot; I wish that you were either one or the other. So because you are lukewarm, and neither hot nor cold, I will spit you out of my mouth. You say, “I am rich, I have acquired wealth, and do not need a thing. But you do not realize that you are wretched, pitiful, poor, blind and naked… [Revelation 3:15-17 NIV]

Now that you understand, take a stand—for the Lord. Express your religious and political views whenever they naturally arise in conversation. Along the way, be sure to live a life that others will envy, because of your strength of character, love, and calm assurance that God still has everything under control. That way your views will be respected even if not agreed upon.

Always be prepared to give an answer to everyone who asks you to give the reason for the hope that you have. But do this with gentleness and respect, keeping a clear conscience so that those who speak maliciously against your good behavior in Christ may be ashamed of their slander. It is better, if it is God’s will, to suffer for doing good than for doing evil. [1 Peter 3:15-17 NIV]

3 thoughts on “Politics and Religion are Inescapably Linked”