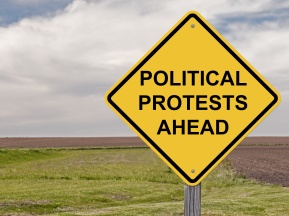 Tony Perkins, President of Washington-based Family Research Council issued a stinging rebuke of the Obama Administration’s bullying states and public schools systems regarding their efforts to keep men’s/women’s and boy’s/girl’s restrooms and locker rooms separate. This week Obama issued “guidance” to school districts threatening to withhold federal funding from noncompliant school districts. Perkins forcefully argued that the motivations and objectives are far deeper than the use of public restrooms/locker rooms.

“But now the country stands at the edge of a great moral abyss. And we must ask ourselves – do we defy the president and save the nation or do we keep the peace and sacrifice our children?”

He (Perkins) reported that Ronnie Floyd, the head of the Southern Baptist Convention, warned, “Sooner or later we have to determine that enough is enough. It’s not going to change until Christians get involved in this battle.”

“The reason they want to abolish gender is because they also want to remove any kind of moral construct regarding human sexuality,” Staver explained. “Ultimately they want to abolish gender so they can abolish the very notion of the creator God himself, who created you and I in His image. Male and female, God created you and I, distinctly different yet complementary.”

As the once great Roman Empire fell, the emperor’s offered “bread and circuses” to pacify the people, much as our government does today. Do we dare allow America to suffer the same fate? Might we someday be accountable to God for our widespread indifference—or will He celebrate the actions we are about to take?

The time for action is inescapably urgent and the time is now! Just ask Tony Perkins, Ronnie Floyd, and Mat Staver.