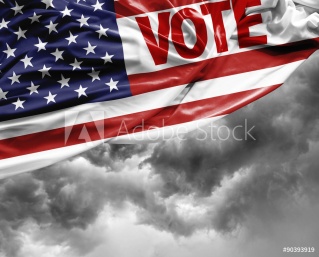 Do NOT fail to vote—ever, even if the only race on the ballot is for a local dog catcher.

During the last major national election, 25,000,000 Judeo-Christian believers sat home. The margin of victory was less than 5,000,000. If just 20% of the home sitters has voted, the outcome would have been substantially different. A significant portion of the recent cultural decline could have been avoided.

I hear people say, “I’m not going to vote, because no one is running that I can support.” Whoa! Do you see that flashing red neon sign in your mind’s eye? It says, “Pride alert! Pride alert! Pride alert! News flash: The election is not about YOU! Sometimes, it’s not even about the candidate(s) running. Here’s why:

Since elementary school, we have heard the opening lines of the Declaration of Independence so often we have become a bit numbed to them. For a moment, revisit those words anyway?

We hold these truths to be self-evident, that all men are created equal, that they are endowed by their Creator [God] with certain unalienable Rights [cannot be altered, abridged, or changed in any way, because they come from God], that among these are Life, Liberty and the pursuit of Happiness [there are more, but this is the starting point].–That to secure these rights, Governments are instituted among Men, deriving their just powers from the consent of the governed, –That whenever any Form of Government becomes destructive of these ends, it is the Right of the People to alter or to abolish it…[Emphasis added]

The rights and freedoms embodied in the Declaration of Independence and codified in the United States Constitution are gifts from God, not grants from government.

Voting was held by the Founders and numerous later statesmen to be a sacred trust. Since voting is sacred, it is an act of worship. Voting is an act of worship, because the one casting the vote is not making a personal declaration or even supporting a particular candidate. The voter is casting a ballot to insofar as possible to guard and protect the rights and freedoms that are gifts from God. If none of the candidates will directly guard those rights and freedoms, at least vote for the one who will do the least damage.

I, for one, do not want to one day stand in judgment, hearing my God say, “I can hardly wait to hear what you did with my awesome gifts!” and have to reply that, “Well—I was so busy chasing materialistic goals the I really didn’t have time to vote much less do anything else that would protect those gifts.”

The signers of the Declaration of Independence were so totally and irrevocably committed to God’s gifts of rights and freedoms that they added at the end, “And for the support of this Declaration, with a firm reliance on the protection of divine Providence, we mutually pledge to each other our Lives, our Fortunes and our sacred Honor.”

The cost was enormous. Later, Founder John Adams exclaimed, “Posterity! You will never know how much it cost the present Generation to preserve your Freedom! I hope you will make good use of it. If you do not, I shall repent in Heaven, that I ever took half the Pains to preserve it.”

Do YOU share their commitment to freedom? What will YOU do? Will YOU at least get off your blessed assurance and go VOTE?

“The people of every country are the only safe guardians of their own rights, and are the only instruments which can be used for their destruction.”

2 thoughts on “Do NOT Fail to Vote—Ever!”