The People’s Republic of China is officially atheist and communist. Yet their Academy of Social Sciences recently testified:

We were asked to look into what accounted for the preeminence of the West all over the world. At first we thought it was because you had more powerful guns then we had. Then we thought it was because you had the best political system. Next we focused on your economic system. But in the past 20 years we have realized the heart of your culture is your religion, Christianity. That is why the West has been so powerful. The Christian moral foundation of social and cultural life was what made possible the emergence of capitalism and then the successful transition to Democratic politics. We don’t have any doubt about this. The Christian Post May 22, 2015 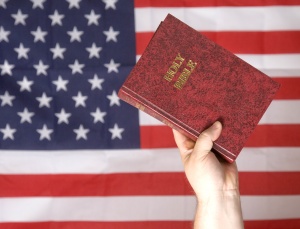 In a recent speech, critical of the United States, Russian Prime Minister Vladimir Putin asserted that there can be no benefit to society when good and evil are treated equally.

What is going on here? Russian and Chinese leaders have come to actually admire the source of America’s strength, which of course comes from God. Our traditional enemies have admired the cultural strengths that far too many American have learned to ridicule. America is increasingly championing evil.

Many of our uncommonly wise Founders anticipated the current condition. Founder and early President John Adams expressed the concern clearly and forcefully:

“Statesmen, my dear Sir, may plan and speculate for liberty, but it is Religion and Morality alone, which can establish the Principles upon which Freedom can securely stand…The only foundation of a free Constitution is pure Virtue, and if this cannot be inspired into our People in a greater Measure, than they have it now, they may change their Rulers and the forms of Government, but they will not obtain a lasting liberty. June 21, 1776

We have no government armed with power capable of contending with human passions unbridled by morality and religion. Avarice, ambition, revenge, or gallantry, would break the strongest cords of our Constitution as a whale goes through a net. Our Constitution was made only for a moral and religious people. It is wholly inadequate to the government of any other.” October 11, 1798 (Address to the military)

“…there is no truth more thoroughly established than that there exists in the economy and course of nature an indissoluble union between virtue and happiness; between duty and advantage; between the genuine maxims of an honest and magnanimous policy and the solid rewards of public prosperity and felicity; since we ought to be no less persuaded that the propitious smiles of Heaven can never be expected on a nation that disregards the eternal rules of order and right which Heaven itself has ordained.” April 30, 1789

“We have been recipients of the choicest bounties of Heaven.  We have been preserved, these many years, in peace and prosperity.  We have grown in numbers, wealth, and power as no other nation has ever grown; but we have forgotten God.  We have forgotten the gracious hand which preserved us in peace, and multiplied and enriched and strengthened us; and we have vainly imagined, in the deceitfulness of our hearts, that all these blessings were produced by some superior wisdom and virtue of our own.” March 30, 1863

In our time, the situation has become far more serious. Freedom is incredibly fragile and can be lost at any time. President Ronald Reagan proclaimed:

“Freedom is never more than one generation away from extinction. We didn’t pass it to our children in the bloodstream. It must be fought for, protected, and handed on for them to do the same, or one day we will spend our sunset years telling our children and our children’s children what it was once like in the United States where men were free.” Annual meeting of the Phoenix Chamber of Commerce (30 March 1961)

This time of year, we often hear the slogan Freedom is not free. It’s been paid for in blood. The blood of Jesus (Y’shua) was shed to give us spiritual freedom from the curse of sin. Throughout many wars, hundreds of thousands of our military warriors have shed their blood and given their lives to protect our freedom from outside encroachment by the armies of other nations.

But it is up to us to fight for and protect freedom from internal decay and collapse. Freedom is not a natural condition. The Garden of Eden was the only place where freedom was natural. Ever since the fall of Adam and Eve, pride has caused men or groups of men to seek power at the expense of the personal freedom of others.

Throughout history and in all cultures power has always tended to concentrate. The U.S. Constitution was the founder’s air tight box designed to contain the Federal government. Today, both major political parties are increasingly ignoring the Constitution; the U.S. Supreme Court long ago abandoned its primary obligation as the guarantor of the Constitution. The results have been tragic.

“There is no nation on earth powerful enough to accomplish our overthrow. Our destruction, should it come at all, will be from another quarter. From the inattention of the people to the concerns of their government, from their carelessness and negligence. I must confess that I do apprehend some danger. I fear that they may place too implicit a confidence in their public servants and fail properly to scrutinize their conduct; that in this way they may be made the dupes of designing men and become the instruments of their own undoing.

Hold on, my friends, to the Constitution and to the Republic for which it stands. Miracles do not cluster, and what has happened once in 6000 years, may not happen again. Hold on to the Constitution, for if the American Constitution should fail, there will be anarchy throughout the world.

If we abide by the principles taught in the Bible, our country will go on prospering and to prosper; but if we and our posterity neglect its instruction and authority, no man can tell how sudden a catastrophe may overwhelm us and bury all our glory in profound obscurity.”

Freedom is a gift from God; it is not a grant from government. It is not natural and must be protected or it will dissipate and the fire of freedom, which George Washington called a “sacred fire,” will be extinguished. The trickle of lost freedom that began over 50 years ago has become a raging torrent today. Founder Samuel Adams, cousin of John Adams, had little patience with people unwilling to fight for freedom:

“If ye love wealth greater than liberty, the tranquility of servitude greater than the animating contest for freedom, go home and leave us in peace. We seek not your council, nor your arms. Crouch down and lick the hand that feeds you; and may posterity forget that ye were our country men.”

A generation later, Senator Daniel Webster added, “God grants liberty only to those who love it, and are always ready to guard and defend it.” Ultimately,

In view of the tragic collapse of the American culture, the obvious question becomes, “Where are all the believers?”

Believers have always had a cultural impact far beyond their actual numbers. Regretfully, many believers today don’t fully understand the concept of freedom. To varying degrees, believers have bought in to the ungodly cultural compromises.

The second, equally obvious question becomes, “Where are all the pastors, rabbis, and church/synagogue leaders who must embed the concept of God-given freedom in the souls of believers?

What do YOU think? What should be changed or pursued differently within the body of believers?