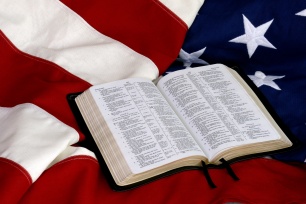 Is it really possible to vote for God? Absolutely! Here’s why. Here’s how.

The American people have enjoyed the greatest freedom for living and self-determination since the Garden of Eden. The only other culture coming close was the ancient Israelites, during the time of the judges (before the kings), a period of about 400 years.

Movie director Cecile B. DeMille personally introduced his epic, The Ten Commandments, the story of the mass exodus of hundreds of thousands of Hebrew slaves (later known as Israelites) from Egypt. DeMille billed the story as “the birth of freedom.” Thousands of years later, the Founders of the newly born United States of America tasked a small committee, including John Adams, Benjamin Franklin and Thomas Jefferson with designing the Great Seal of the United States.

The Founders used the model of the ancient Israelites for many of the features of the new American government. The Great Seal committee was so inspired by the ancients that an early draft of the Great Seal proposed an embossed sketch of the Hebrews leaving Egypt. The draft was later set aside as excessively complex. However, its existence as part of the preplan underscores the affection the Founders had for the ancient culture and the inspiration they derived from it.

The Founders recognized that freedom and certain rights are gifts from God, not grants from government. Representative freedoms and rights were enshrined in the American Declaration of Independence and codified in the United States Constitution.

The writers of the Constitution bound the federal government with very tight restrictions, because they understood that man’s sin nature produced a relentless concentration of power in virtually every culture throughout all time periods of recorded history. Secular philosophers call the same phenomenon “egoism.”

The Constitution was designed to be an anchor for the American government and the American culture. Nearly a century later, the emerging liberal/progressive Humanist movement proclaimed that the Constitution must be a “living” document that can change with the times. From that time on, the liberal big government view challenged the long-standing conservative small government view. The need to restrict the passions of men using a Constitutional lock box is the basis for today’s conservative view supporting small government.

After election day, November 8, 2016, the President of the United States will be either Donald Trump (nationalist) or Hillary Clinton (globalist). As voters, it is important to ignore the trash in the media to focus on the beliefs and actions the candidates are likely to pursue if elected.

As a globalist, Hillary Clinton’s liberal/progressive views and actions as president would be diametrically opposed to Trump’s. Hillary is determined to achieve unlimited abortion at taxpayer expense, greatly expand Planned Parenthood funding, destroy marriage as an important cultural concept, and virtually eliminate American sovereignty by eliminating borders and giving away sovereignty by camouflaging the giveaways in so called free trade agreements.

Will America survive or die? It is up to YOU! Vote for God! But first, pray and consider several quotes from those who loved America from the depths of their souls.

“Religion in America…must be regarded as the foremost of the political institutions of that country; for if it does not impart a taste for freedom, it facilitates the use of it…

“You…are placed by Providence in the post of honor, because it is the post of danger…The eyes not only of North America and the whole British Empire, but of all Europe, are upon you. Let us be, therefore altogether solicitous that no disorderly behavior, nothing unbecoming our character as American, as citizens and Christians, be justly chargeable to us.

Resistance to tyranny becomes the Christian and social duty of each individual…Continue steadfast, and with a proper sense of your dependence on God, nobly defend those rights which heaven gave, and no man ought to take from us.”

Boston Patriot Josiah Quincy proclaimed, “Under God, we are determined that wheresoever, whensoever, or howsoever we shall be called to make our exit, we will die free men.”

Vote! Vote! Vote! Vote at every opportunity including seemingly minor local offices. Vote thoughtfully after careful consideration of the record of each candidate and his/her specifically clarified views. Do not fail to vote; do not vote frivolously.